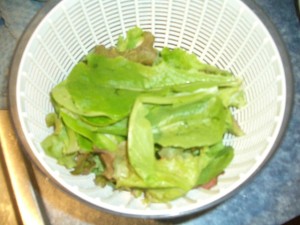 The first planting of lettuce was a success, obviously. I can’t remember when exactly it was planted (mid- to- late April, maybe?) but it’s been cool and damp so it’s produced nicely. It also got much larger during the 90 degree heat snap we had last week, because this is what it looked like at the end of the week of May 17th: 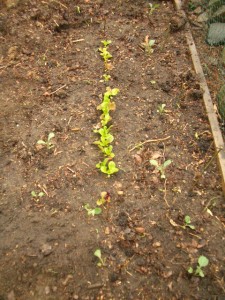 We picked enough for a salad for both of us, and while I was out there I noticed that the second planting has already started to sprout. It will be a while yet before anything else is ready. That’s ok, though, because when it comes, we usually get buried.  We’ll see if I am still so Zen about waiting in a few weeks, when it’s all weeding and no vegetables for our (my) efforts.