Given that most woodchucks head out to their winter burrows by early August and it’s now July 25 and no sign of him, we are bidding adieu to our household security officer.  The average woodchuck lives 3 -6 years, and he was already here when we bought the house, so chances are pretty good he’s gone to the great burrow in the sky.
Of course, he could have moved next door to the neighbors’ house, whose garden doesn’t have a fence.

Yesterday I made Herbed Summer Squash using a fresh summer squash, zucchini, thyme and parsley from our garden. 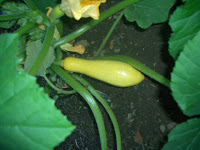 I am always in search of new recipes – I search the Food Network website often (and have found two great recipes in two days this past week from there) and I also subscribe to Every Day with Rachael Ray, Cooking Light, Food & Wine and my mother in law gives me a gift subscription to Vegetarian Times, which is then gifted to Stella Caroline who has a policy of cooking vegetarian at least once a week.  (Admirable; I use the recipes for ideas for sides.)

I love the magazines because Food & Wine and Every Day with Rachael Ray often have great suggestions for kitchen gadgets and other gift ideas that I think are perfect for the cooks in my life.  I’m not the only cook in my household; J has quickly become a grilling expert.  He’s very partial to the show on PBS called Barbeque University with Steve Raichlen.  The show has given us Bourbon Brined Pork Chops, Bourbon & Apricot Pork (the recipe calls for ham but we substituted) and Tennessee Pork Loin, the latter prompting J to ask if we had a good pepper mill.  We didn’t, so he made do with what we had.  The recipe was fantastic.  Good thing, because he’ll be asked to make it again.  If only he had the right tools….

Fast forward to today – I am flipping through the August issue of Food & Wine where NYC chef Nick Anderer cites this pepper mill as kitchen gear worthy of a splurge.  Since I like to encourage J to cook (and keep the heat out of my kitchen in summer), I went over to the website and ordered one for him.  The company is based on Nantucket, which seems both odd and fascinating to me as I always think of the island as being purely a tourist destination, but obviously it must have some other industries.  One of which is making pepper mills.

Further along in that F & W issue is an article about Sauvignon Blancs, which caught my attention for two reasons – 1.) Sauvignon Blanc is my favorite type of white wine; 2.) the author, Ray Isle, writes, “….But Sauvignon Blanc has always been a love-hate proposition, much like cilantro or beets.”  Hee.  Read the article if you don’t believe me.  It’s been established already that I like cilantro, the jury’s out on beets (although I’m leaning favorably towards radishes, so who knows) and I love Sauvignon Blanc – in fact, I would recommend it with any of the above-mentioned pork recipes.  Or anything, really. 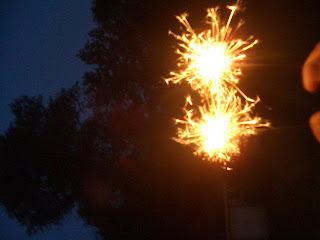 Fourth of July has come and gone, and with it my first attempt to make something with the radishes. 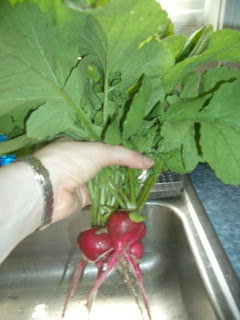 I made the Delectable Radish Dip as directed by The Hungry Hippo.  She was right, it was delectable.  I stole a page from Stella Caroline and put the radishes in my food processor.  I think she has a much better food processor than I do, with multiple blades that chop vegetables better than mine does, but I will say pitching whole radishes into a mini food processor and pressing “high” makes a terrifically fun racket.
There were more radishes ready this weekend, so I went online to the Food Network website to see what I could find, and found a recipe by Rachael Ray called Red Radish Salad that we liked even better than the DRD from The Hippo.  (Sorry Hippo.)

Combine sugar, lemon juice & sour cream in a medium bowl with a fork. Add radishes, apple, and cucumber.  Turn vegetables and fruit in dressing to coat. Season with dill, salt, and pepper, toss again; serve.
I know a lot of people don’t like Rachael Ray but I’ve been a subscriber to her magazine for a couple of years and I really like her because she uses prepared ingredients in a lot of her recipes which is totally necessary when you want to make dinner on a weeknight and you don’t get home until almost 7 PM.  Anyway, we really liked the salad.  I made a substitution by using Granny Smith apples instead of Delicious apples, based on some of the comments from people who had made the salad.  I will definitely make this again. 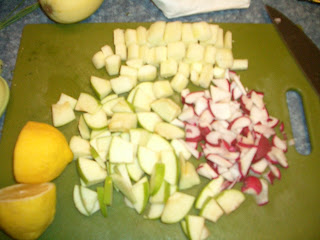 I also chopped up the cucumber, apples and radishes more than she suggests, just to make sure that we didn’t end up with a forkful of radish for a bite.
Our very first summer squash has been picked, and will be used in tonight’s dinner.  J suggested I look for a recipe that involved both radishes and summer squash but I don’t think those are two items that have been very popular combinations. 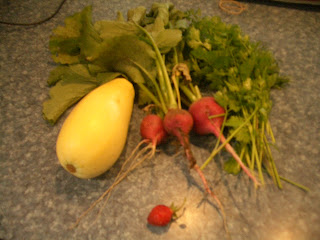 Oh, and do you see that small red thing at the front of the photo?  That would be a strawberry.  Yes, really.  I got one the chipmunk missed.  I brought it in, washed it off and decided I would eat it after dinner.  It tasted terrible.  Really and truly terrible.  I can’t even describe the flavor.  So maybe the chipmunk is doing me a favor?

Speaking of someone who isn’t doing me any favors, here he is napping in my purple bush beans.  Literally on one of the plants:

He came into the main garden with me to “help” me weed.  Despite having about 15 pounds of cat on top of them, the beans are doing really well, and flowering like crazy.  Soon I’ll be hunting up bean recipes.  Stay tuned.

….at least, that’s what I tell myself.  I keep looking back at the time-lapse plant cam photos from last year and reminding myself (and J) that things really didn’t get going until mid July and serious harvesting didn’t start until mid to late August.  Still, patience is a virtue, one I am sorely lacking.

It has been a really weird growing season so far.  We got hit with some intense heat in April, bumping up the planting season by a good week or two.  Then June was predominantly cool and wet, causing plant growth to stall. 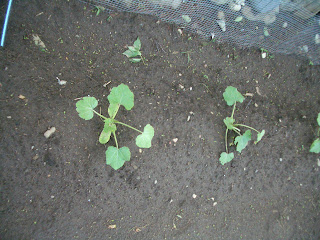 Last week we got a couple of days of hot, humid weather which helped quite a bit. 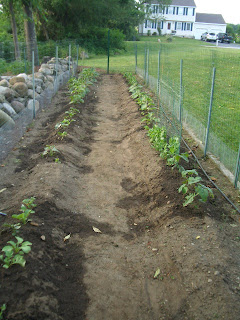 The plants we put in during the original April heat spell (potatoes, carrots & parsnips) are doing really well: 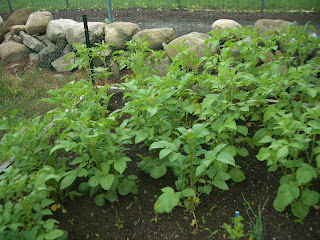 As are the herbs: 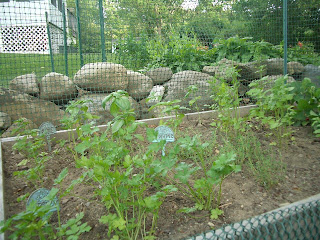 Especially the herbs in the pots with the hops: 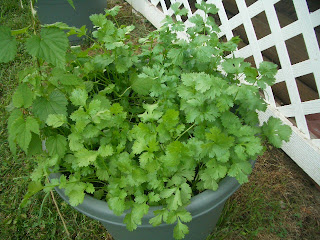 There is more hot weather predicted for this weekend and we fertilized the plants last weekend, so we might just have a chance of a halfway decent growing season.  Our second planting of beans and corn are coming up, and I intend to stop talking about planting another two rows of carrots and parsnips and actually do it.  Someday.  We have zucchini starting and at least a half-dozen summer squash, which seems exciting now.  Ask me again how I feel about squash right after Labor Day when I’ve been eating it for weeks.

Tomorrow is the 4th of July and I intend to harvest a few of our cucumber beetle-deterring radishes.  They look like they might be ready.  I’m not sure exactly how I feel about radishes – I don’t think I really like them, but I haven’t been eating them for a few years so I’m not sure.  I did suggest that we plant another crop, just in case.  I am planning to make a recipe from The Hungry Hippo that she calls “Delectable Radish Dip/Slaw” which Stella Caroline has also made and raved about.  These are two smart women who are fantastic cooks, so if I don’t enjoy this dip, odds are good that I don’t like radishes.