The tomatoes keep coming – every week we are filling a large bowl full of Roma, Mortgage Lifter, Brandywine & Kellogg tomatoes:

This particular bowl full is just Roma, Brandywine & Mortgage Lifter.  I have done some extensive reading on the internet about canning tomatoes, but I have a high degree of fear about botulism (who wouldn’t?) for anything that does not involve vinegar, so I have been opting to freeze the tomatoes.  But first I have to prepare them.  Step one, plunge into boiling water for about a minute to loosen the skins: 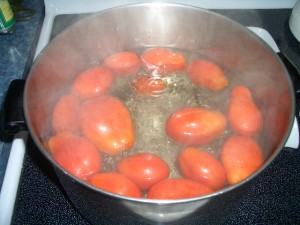 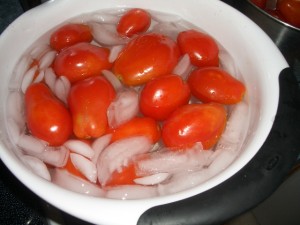 Step three, drain and place into a separate bowl: 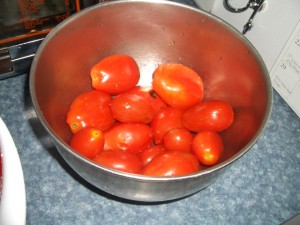 Steps four, five & six – peel, seed and dice the tomatoes.  (Infinitely too messy to do and use my camera, so no photos.)

Step seven – measure out into two cup increments, put in Ziplock bags, and prepare for freezer: 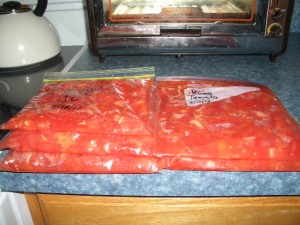 I know this winter when I am pulling them out for soups or chili or some other recipe that calls for diced tomatoes I am going to be so happy I put all this effort in, week after week, preparing and freezing these tomatoes.  But right now I’m on step nine – pray for an early killing frost.