One of the sad facts of growing a garden is that inevitably everything is ripe at the same time.  And when you’re expecting to get wiped out by a hurricane, you tend to hasten the harvesting just a little. 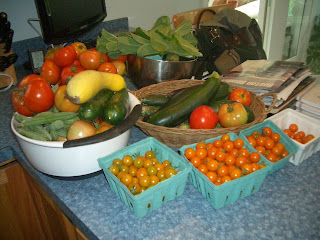 So it’s critical to find a recipe that uses a lot of vegetables.  Enter Rachael Ray’s grilled ratatouille boats.  (Making ratatouille always reminds me of the Disney cartoon of the same name, which is what inspired a burning desire in me to go to Paris.  Go figure – I based a vacation on a cartoon mouse.)  Anyway, the recipe:

Cut zucchinis in half lenthwise: Scoop out some of the seeds, the scoop balls of flesh from the center of the zucchini to create the boats (a melon baller works well, but I just uses a teaspoon, since I don’t have a melon baller.  Psst, mom – Christmas gift idea!)  Heat 1 tbsp of the olive oil in a large skillet over medium heat, add the onion & cook for 5 minutes, then the garlic and cook for another minute.  Add remaining olive oil (2 tbsp, if you’ve not been keeping track) the eggplant and zucchini balls, and cover & cook 8 minutes.  Add in the tomatoes and cook, stirring, until the mixture is thick, about 5 minutes.  Add parsley and season with salt and pepper.

Fill the zucchini shells with the ratatouille mixture, sprinkle with cheese and grill, covered, over medium-high until the cheese is melted and the shells are slightly softened.

So that’s Rachael’s version.  I used parsley and basil, swapped the mozzarella for asiago and added fresh peas because they were loitering in the basket and there weren’t enough for a meal. Which is how I got from this:
﻿﻿ 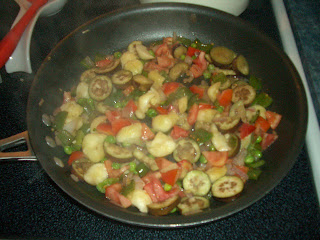 It’s enormously satisfying to sit down to a dinner where pretty much everything in it came out of your garden.