We are continuing to be buried in snow, and it’s much too early to start planting seedlings, but I do have something entertaining for you to chase away these dreary winter days.

You may remember almost two years ago, when we had that problem with the crows, and we accused Max of trying to rip his way through the screen into the house?  J put up a sign, which apparently works – our neighbor captured the following one day last summer, but just sent us the video:

Granted, that crow is sauntering away, but he does take in the sign and leave.  It makes me laugh every time I see it.

A few months ago, J came onto our sunporch from outside and announced that the screen over one of the basement windows had a big hole in it.  I went out to look, and sure enough, the screen was mostly shredded and all over the ground by the window.  We determined that it was cat sized, and we made mild accusatory statements about our favorite assistant gardener: 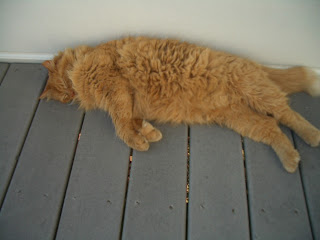 He has been making an active attempt to come live with us, so we thought it made sense – at his house, he can get in and out through an open screenless basement window.  Why not try and remove the screen and see if that works here?

J repaired the window screen with wire mesh to prevent the hole from occuring again, we continued to accuse our favorite feline, and life went on.

Several mornings later J was getting ready to leave for work when he heard what sounded like banging on the house.  He realized it was coming from the basement, so he went downstairs without turning on the lights.  There, in the window where the screen had been torn out, was a crow.  Pecking on the window.

Now, J has a thing against crows.  He says they always look like they’re up to something.  Supposedly they’re very smart birds, but I fail to see the wisdom of ripping out a window screen and then leaving the mesh on the ground.  It’s like it was done just to be destructive.  (J says they tore out the window screen to distract us, because they’re always up to something. I will only be impressed if they do something really sneaky, like steal my car.)  J’s response to the birds was to put up a sign letting them know they were not welcome: 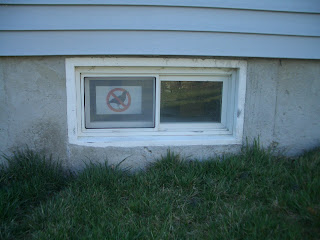 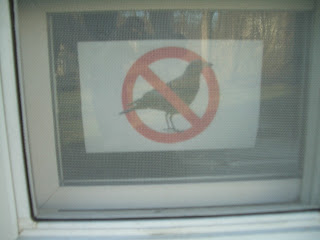 I laugh every time I walk past that window.  We don’t see crows on that side of the house anymore, either.﻿