I can’t believe how long it’s been since we had any substantial rain.  Thank goodness we have the drip irrigation in the main garden and the raised beds: 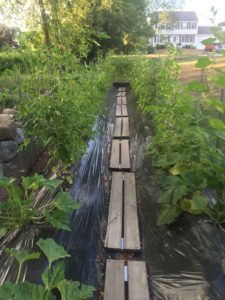 For the first time in ages, the cucumbers are actually doing something, and will bear fruit:

Powder mold, squash beetles and other environmental factors have contributed to the lackluster performance over the last few years.  It’s been a while since I’ve been able to make homemade pickles.  That might be changing this year.

Of course, we’re still being supervised:

The nicest thing about this cat is that he wants 5-10 very intense minutes of your attention, and then he moves off to stalk birds or mice or just snooze a bit.  We were commenting the other day about our luck in getting neighborhood cats that actually give us the time of day.  Even better when they keep away the destructive pests.

We are continuing to be buried in snow, and it’s much too early to start planting seedlings, but I do have something entertaining for you to chase away these dreary winter days.

You may remember almost two years ago, when we had that problem with the crows, and we accused Max of trying to rip his way through the screen into the house?  J put up a sign, which apparently works – our neighbor captured the following one day last summer, but just sent us the video:

Granted, that crow is sauntering away, but he does take in the sign and leave.  It makes me laugh every time I see it.

The Chinese Zodiac features various animals, each featured in a single year – Year of the Dragon, Year of the Rat, etc.  I decided that if our garden could best be classfied this year it would be Year of the Pest.

First we lost the cucumbers to cucumber beetles: 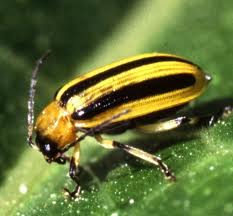 The plants do this, which is extremely depressing: 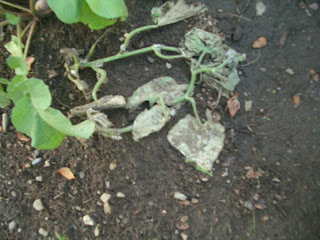 Then the squash died, courtesy of this guy and his friends:

His cousins were over visiting my lillies, eating the blossoms, leaves, stems…….

We sprayed the lillies, sprayed the leaves of the squash and cucumber plants and then eventually gave up and pulled everything up. And it had been quiet for a few weeks, so we thought we were doing okay, and we were looking forward to harvesting what was looking to be a banner year for corn.

And then, we were visited by these guys:

So gross.  I don’t love beetles, but worms of any sort (except earthworms) literally make my skin crawl.  The corn borers hatch from eggs layed by moths and they immediately burrow into the corn: 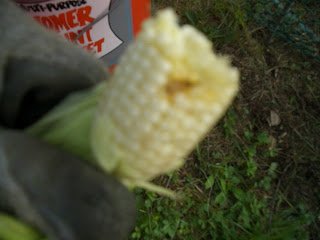 You really can’t treat for them because it will get into the ears, so we solved the problem by harvesting every single ear, checking them and separating them into buckets, then cutting down all the cornstalks from the first planting in an attempt to to try and save the next planting, which is both healthier and currently without any ears of corn.  We won’t know for a while whether it worked.

We were able to save about 2 dozen very small ears of corn, which we blanched and cut off the cob.  We got about 5 cups of corn, which I froze.  So we might have won a round against these bugs.

Seriously.  Year of the Pest.

﻿
“Gardening is a kind of disease.  It infects you, you cannot escape it.  When you go visiting, your eyes rove about the garden; you interrupt the serious cocktail drinking because of an irresistible impulse to get up and pull a weed.”  ~Lewis Gannit
This is so very true.  This past weekend my MIL came for a visit which allowed me to knock off early from my planned garden chores on Saturday as my parents were also joining us for dinner.  The whole time we were sitting on the deck having dinner I could hear the weeds growing in the ornamental bed behind me, and had to resist the urge to jump up and go weed.  I take orderly, tidy gardening to new heights.  My thought is, why should the weeds reap the benefits of proper watering and fertilization?
It is utterly forbidden to be half-hearted about gardening.  You have got to love your garden whether you like it or not.  ~W.C. Sellar & R.J. Yeatman, Garden Rubbish, 1936
Last night I worked outside in the garden until 8:45 PM weeding, defoliating the bean plants that have been attacked by bugs, and spraying neem oil to try and save the plants.  This year has been particularly brutal for all sorts of bugs (especially ticks; we pull one off one or the other of us nearly every time we come into the house) and they have been munching heavily on our eggplants, peppers and especially beans.  But only in the main garden; the beans in the back 40 appear to have escaped almost unscathed.  Still, we want beans, and in an old edition of Organic Gardening magazine I found references to using neem oil as an organic pesticide.  Neem oil is a vegetable oil pressed from the fruits and seeds of the neem, an evergreen tree found originally on the Indian subcontinent and now in many other parts of the tropics.  I have had some success with bug prevention with my lillies by using cayenne pepper spray, but those bugs are red lilly leaf beetles, which are altogether different foliage-destroyers:
I have to be vigilant, though.  I usually hand-remove and crush them and then spray down the plants once I think I’ve removed them all, but there are often more tiny holes in the lilly leaves a few days later, and the cycle repeats.  I think we’ll be on the same path with the beans, if we even get any beans this year.  Fortunately the peas appear to have no infestations whatsoever, meaning we could have a bumper crop and I am really going to need to start researching chest freezers.