In addition to our success with tomatoes this year we also claim success with the pumpkins.  Moving them to the back-40 field and essentially ignoring them seems to have done the trick.  We harvested 23 Jack-Be-Littles: 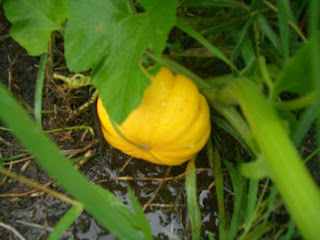 And two Howdens.  One of which rotted before I could photograph it, and I’m not sure where the other one went in the big pile on the porch.  The Lumina vines were eaten by bugs.  So no Luminas, but that’s okay.  We’ll try again next year.  We did decide that we needed bigger pumpkins for carving later this month, so while we were in New York we purchased we purchased five Jack-o-Lantern pumpkins for carving from an Amish farmstand and added them to our own haul.   They came out even better than last year: 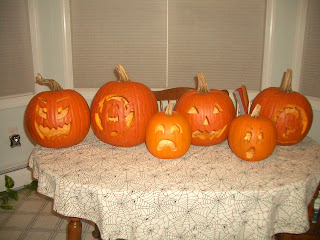 In celebration of pumpkins, nothing says fall like a pumpkin spice martini.  We discovered these last year, when we purchased a bottle of Hiram Walker’s Pumpkin Spice liqueur for Halloween and tried to figure out what to do with it.  The result was the martinis.  The liqueur is only available in the fall, so once we used it up last year, no more pumpkin spice martinis.  Imagine my excitement when J brought it home this year. Fall has officially begun!

Combine the vodka, Bailey’s and pumpkin spice liqueur in a shaker with ice.  Pour evenly between two martini glasses, and sprinkle cinnamon and nutmeg on top. 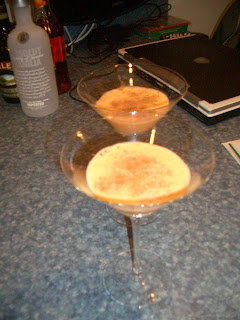