So, more days than not Old MacDonald (sometimes accompanied by me, but I have late hours at the job) has been going out to water the Back 40 garden, and it has absolutely paid off: 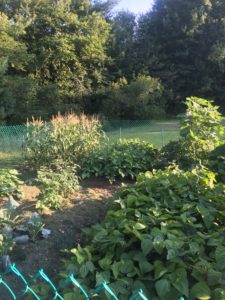 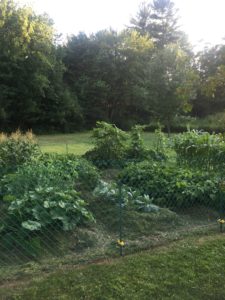 I can’t get over how good it looks.  He did admit that there have been two applications of fertilizer, which combined with the watering seems to more than be working.  Our experiment with grass clippings is also a success; we’ve been out to weed only twice so far this season and both times took about an hour and a half to do the whole garden.

The secret to our success is a 50-gallon cistern we keep in the back, and refill by running hoses linked together from the house whenever it gets down in volume.

And making her first appearance on the blog, Old MacDonald’s mother and a farmer’s daughter (her father was a farmer in Denmark; apparently farming is genetic but skips generations):

Our experiment out back is a success – this was the second picking of beans, just two days after our first round: 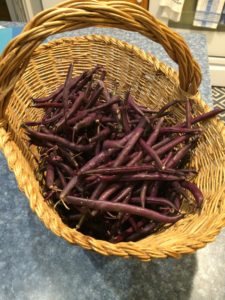 I only wish they didn’t turn green when cooked.