This year we decided to grow Kellogg tomatoes.  Mostly because the name brought breakfast cereal to mind: 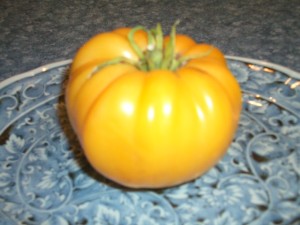 They are a bright yellow-orange, like the one in the photo above, when they are fully ripe.  These tomatoes are not quite as flavorful as Brandywines, but they add a nice pop of color to a tomato salad.  Online searches told us that they can get large enough that they hang over the edges of sandwich bread when split horizontally. I believe it.

We were starting to (foolishly) believe we had worked out the proper balance of vegetables in our many different garden beds.  So far this year we’ve not given away much in the way of produce – a few tomatoes, some Fooled You jalepeno peppers, a few zucchini – because we’ve done a lot of canning – 9 jars of dill pickles, 5 jars of banana peppers, 4 jars of bread and butter pickles, and 4 jars of dill beans.  We decided, almost as an afterthought, to go out to the garden tonight to pick “…a few things….” and ended up with all this: 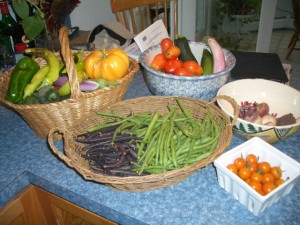 We have been officially schooled, onced again, by the calendar.  It is all fun & games until August rolls around, and then we’re buried.

And the next batch of peas and lettuce have started to come up.  If only we could figure out a way to have vegetables 4 months of the year, instead of 2…..