We put the first round of seedlings into the ground May 19. This was the rack before: 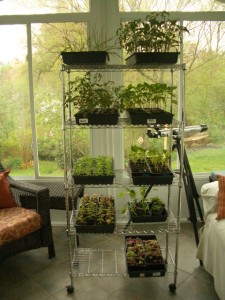 In fairness, the bottom two racks were flowers, and went in pots and boxes at the front of the house. This year J decided to try a new planting scheme, given that we got hit so hard last year and lost our squash and cucumbers. The plants are in groups of four types of each plant, scattered around the garden: 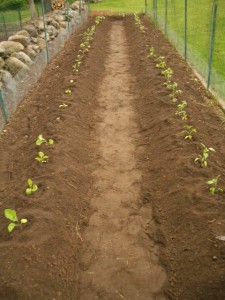 It’s hard to tell now, but should look better in a few weeks as things start to grow. Speaking of growing, the lettuce and cabbages are coming along nicely: 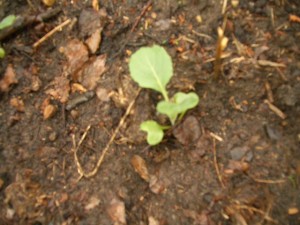 As are the parsnips and carrots, although they are still too small to see. There are some holes in one line of the parsnips, where a lot of them didn’t come up, so I am going to sow some more this weekend to fill in the gaps. 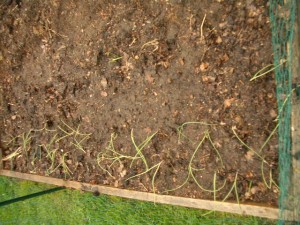 I am growing red cippolini and while I suspect I might have spaced them too close together, I am going to risk it because we did them from seed and if it doesn’t work we’re out less than $2 for a package of seeds and the time it took me to plant them (about 30 minutes.)

I also put in basil, cilantro and tarragon seeds in the herb bed; I’m planning on a subsequent planting in pots near the deck for cilantro, basil & dill. I found the tarragon seeds to be fascinating:

You can’t really tell from my photo but they are a long black seed with just a touch of beige or white at one end. I picked out a Mexican tarragon from the catalog, just to try growing it. I don’t really use it that much in cooking, but I guess I’ll learn some new recipes in order to make use of it.

Also seeded this weekend were French Breakfast radishes and turnips. They went in the bed with the carrots, parsnips and beets, which are looking fabulous.