When I put the potatoes and shallots in this year (totally an impulse buy) I had no real sense about how to grow them.  I was marginally concerned that I had no idea what I was doing, nor did I know anyone who was growing potatoes. Well, except the parents of my Crazy Russian Friend (CRF) who grow potatoes in….Russia. (Imagine that.)  CRF insists that the climate in his hometown is the same as here, so I asked some advice about how to grow them.

“You plant them in the ground,” he told me, stirring his tea.  (Er, thanks dude, figured that part out.)

“What about mounding the soil around the plants, like I’ve read?”

“Yes, you should do that to keep the potatoes from popping out of the ground.  How many acres of potatoes do you have?“

“I have six plants.”

“You will not get very many potatoes.”

“Any potatoes at all, really, will be a victory.”

“It is good that you have low standards for potato production.“

So other than being an entertaining lunch companion, CRF was not particularly enlightening with tips for growing potatoes.  (And those of you who know CRF are no doubt laughing, knowing exactly the tone of voice he used and the fact that I always tell his parts of stories with a thick Russian accent.)  By that point, they were already in the ground so I had lost nothing in the venture.

A few weeks ago the plants developed what looked like potato beetles.  Internet research taught me that you can’t actually chemically eradicate potato beetles because they’re immune to all but the most hazardous pesticides.  Since we’re pretty much an organic garden anyway, the preferred method of removal, by hand, seemed like a great alternative.  (A recent Facebook post also taught me that you can sprinkle bran around the potatoes, which potato beetles will eat.  They then drink water, which causes the bran to expand and the beetles to allegedly explode.  I have no independed verification of bran-consuming exploding beetles, but the idea of it delights me, as does imaging what exploding beetles sound like.  Guess who raided her husband’s cereal this morning to go sprinkle around the potatoes?)

The hand removal of the beetles has been going well, as you can see below: 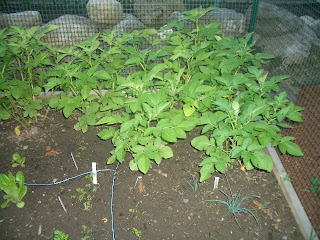 I check the plants every few days.  While out poking around in the garden, I noticed what looked like a very brown rock poking out from under one of the plants.  Upon closer inspection, I discovered it was actually a potato: 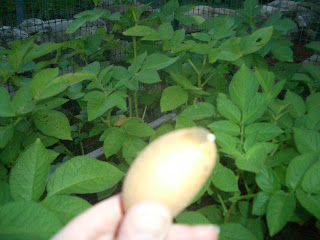 So there are apparently potatoes growing under all that leafy beetle-infested plant life after all.  Hopefully they will be considerably larger by harvest, or I won’t be sharing.  Not even with CRF.