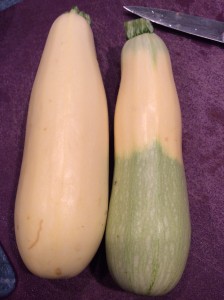 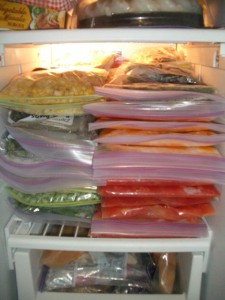 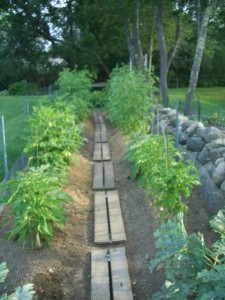 Now that we are well and truly past mid-August, here’s where things stand in the yard: 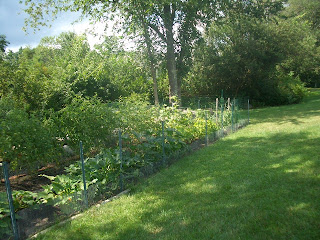 Our main garden and raised beds are doing well.  This week I noticed that the potato plants are starting to die off, which means I should be harvesting them soon.  (CRF did share that tidbit over tea.)  The back forty patch has not done as well as we would have liked, but that area was so wet right through June it is nothing short of amazing that anything is growing there.  The watermelons are pretty much toast – nibbled by some bug, they barely grew.  Two of the five mounds still have some greenery, but that’s it.  The pumpkins are growing, and so far we have eight small green Orange Smoothie pumpkins, and two Jack-Be-Littles.  It seems unlikely that the Howden or Lumina vines will produce pumpkins for fall.  (The Luminas got eaten by the same bugs that went after the watermelons, we think.)  And while I’m disappointed that I will not have white pumpkins for my porch (think of the color contrast between white pumpkins and orange flames, when J lights them up on Halloween!), our only expectation was that we would get the garden in back there this year – the area needed heavy brush-cutting, mowing, plowing and tilling.  Now that we’ve established an area, next year we can improve it and overall crop health.

What we’ve learned so far:

1.) It is gong to be possible to grow two crops of certain types of vegetables, such as beans and peas, in our hardiness zone.  (With our occasionally late frosts – we sometimes have them as late as the 2nd weekend in May – we thought it was only safe to plant after Memorial Day.)  Our goal next year will be to do two plantings of peas, and three of beans.

2.) Fertilizer – it makes all the difference in the world in the growing season in central New England.  We’re partial to Neptune’s Harvest, an organic liquid fertilizer you mix with water.  Expensive, but worth it for how it works and the fact that it’s organic.

3.) Squash plants – six of each (summer squash and zucchini) is too many.  Four each is more than enough.  When we try to plant six each again next year, someone remind me we don’t need that many.

4.) You really can have too many sungold tomato plants.  (Even for me.)  They don’t freeze well, so we have to consume vast quantities of them or give them away.  Part of me doesn’t mind putting the sungolds into berry boxes and distributing them, but a (tiny, little) selfish part of me dies a little death every time I hand over a box of them.  Next year we’re going to reduce the number and try some other tomatoes, like plum, so I can make sauce.

5.) Those strawberries are just for the chipmunk.  He will outsmart every trick you have to keep him away.  Just give up, and leave a tiny napkin next to the plants so he can wipe his mouth on the way out of the garden bed.

6.) The hammock is much more useful when properly installed.  Maybe someday I will actually get to sit in it for more than 10 minutes: