﻿So, the hurricane has come and gone, and we appear to have gotten off with a few downed small branches, a ton of leaves, and a semi-flooded garden.  Irene did get a tomato, though.

Which is not a terrible thing, frankly.  Stella Caroline has a tree down on her deck.  Midway through the storm J went out to look at the corn – apparently about a dozen stalks were down at that point.  We expected heavy losses from the garden, so we picked anything that looked vaguely ripe on Saturday.  There was a lot of stuff: 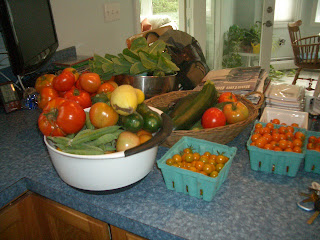 We picked two huge bowls of early girl and brandywine tomatoes, three boxes of sungolds, peas, eggplants, lettuce, cucumbers, peppers, summer squash, strawberries (take that, chipmunk!) and parsley and basil.  Then I spent an hour washing produce.  Because so many of the tomatoes aren’t ripe, we put them in a single layer in cardboard boxes with a banana in each box to help ripen them.  (Fruit gives off a gas that causes produce to ripen faster, which is why you should never keep the two together in the veggie drawer in your fridge.  J found the banana trick on the internet, and we thought, why not?  What do we have to lose, other than a lot of underripe tomatoes?)  We dragged everything out of our yard, off our deck and front porch, and tied the tomato cages to each other and the fence.  We staked the eggplants and peppers (which are producing nicely) and crossed our fingers.

That evening, our favorite garden supervisor came to visit us, but we thought he went home (he has 24-hour access to the basement through a window at his house) until we looked out the front windows Sunday morning and saw him huddled on our front porch in the rain, yowling.  Because we’re saps, we let him in, and he happily snoozed on our sunporch most of Sunday, after being toweled off and given a lap to sit in and an ear scratch for the indignities of Irene:

He is totally trying to move in.  We’re resisting, particularly since he doesn’t do anything to pull his weight.

The drink, not the monster storm bearing down on us outside:

1 oz white rum
1 oz Jamaican dark rum
1 oz Bacardi 151 rum
3 oz orange juice
3 oz unsweetened pineapple juice
1/2 oz grenadine syrup
crushed ice
Combine all ingredients, mix well by shaking.  Pour over crushed ice in hurricane glass. Or a travel mug.  Or any cylindrical vessel that will convey the delicious drink to your lips, with or without a straw.  (In times of crisis it is important to be flexible.)  Enjoy while watching all the coverage of the storm on television, wondering why all the fuss about the weather.