Well, a lot has changed in the garden in the last few weeks.  Back on May 31, I posted this picture: 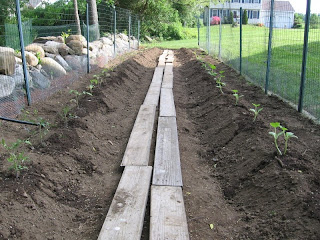 This was last night’s photo: 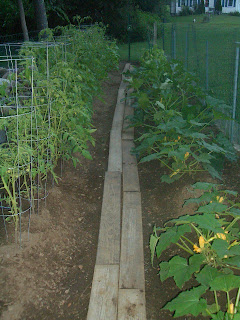 We’ve had a string of hot days lately, so that’s helped enormously.  (Also enormously helpful?  The Cocktail Farmers were in the Caribbean for my cousin’s wedding, partaking of tropical frozen drinks at the 2-for-1 Happy Hour.  One of the best was called a Tropical Breeze featuring mango puree, strawberry puree, and Midori.  When we figure out how to duplicate it, expect to see it here.)

There have been some casualties along the way: 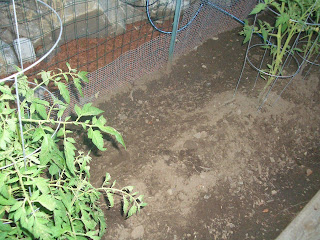 Just before we left I noticed several of the Brandywine tomato plants had some sort of yellowing blight near the stems.  Because they came from a nursery and previous tomato blight infestations have been linked to nursery plants, I ruthlessly ripped them out before we left.  Nothing, NOTHING must interfere with the Sungold tomatoes, further down the row.   I’ll sacrifice everything else in the garden for those.  The bonus in ripping out the plants was that I discovered the subterranean watering system J put in the garden is working, and the roots are reaching down into the soil rather than spreading out along the surface.  So that was a decent consolation prize.

So far everything else is hanging in there.  We have lots of zucchini coming in – in fact, we harvested the first one before we left and gave it to our neighbor, and picked three more on Wednesday.  But they keep coming: 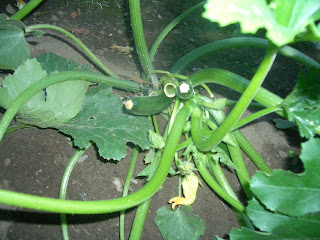 As do the summer squash: 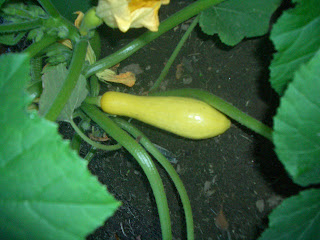 This one has my dad’s name written all over it

And we’re starting to see tomatoes, too: 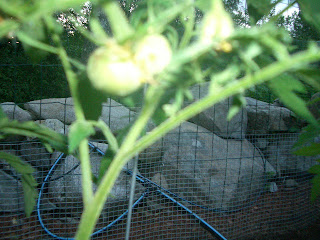 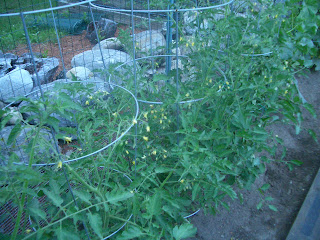 And beans!  Last year we put in about a half dozen plants, transplanted from the seed starting trays, and got enough for one meal for the two of us.  This year?  Directly into the ground, 1 inch apart and I planted 40 of them.  36 came up: 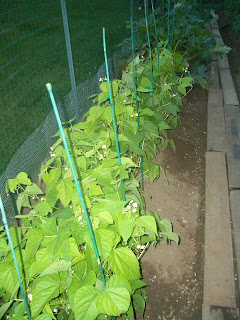 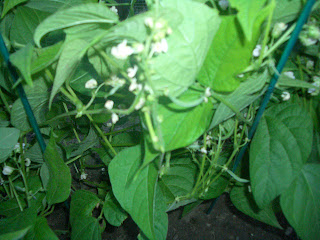 We’re going to have bushels of beans this year, if things continue as they have been.  I can’t wait.  Last year nobody else got any, because there simply weren’t enough to share.  I’m sure my friend Stella Caroline will come up with some fantastic side dish for them.  (She is both a fabulous cook and a tremendous baker.  Seriously – when she brings me something there is the internal struggle to listen to the angels of my better nature and share with J.  I do, but boy, I really, really don’t want to share her yummy treats.  I didn’t know her when I married J, because if I did the marriage vows probably would have included a line about sharing pastry.  Instead we recited a Navajo Wedding Blessing, which does not include a reference to caramel chocolate matzo.  That alone entitles her to one of my kidneys.  And one of J’s.)

Our experiment with peas is so-so.  They look a little feeble, and we put them in kind of late: 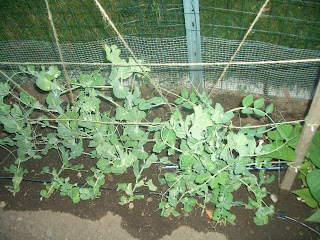 We do have one ENORMOUS pea pod, however. 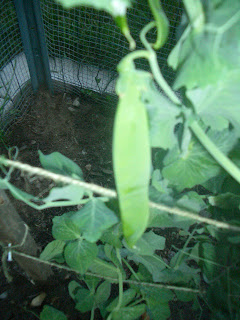 We’re just not sure there are any peas in it.  There are buds on the plants, though, so hope springs eternal….like death, taxes, and the neighbor’s cat needing to nap right in the way: 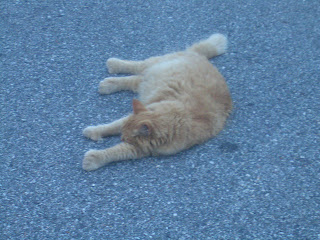